“So … why do you want to write about me?” my then eighty-year-old father asked me over a dozen years ago when I began to interview him for a book. 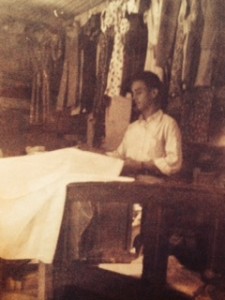 Why indeed. My father’s humble response shows what kind of man he is.

His story morphed into my novel, Luck is Just the Beginning, published by Floricanto Press  on November 23, 2015. It is inspired by the true story of his remarkable luck. My father won the lottery after a premonition. But what’s more remarkable is what happened after.

Ramón León was born in Puerto Rico in 1925. My grandmother lost her first eight babies shortly after birth. My father was the 15th child. No one in his family except his sister (the only girl of the fifteen!) completed high school. They were poor and hardworking and owned a clothing and textile store in the village of Maunabo on the southeast corner of the island. My grandmother, Abuela Chepa, sewed for villagers on special occasions, items such as a shirt or skirt selected from her dog eared Sears-Roebuck catalog.

My father did alterations, too, but since a young boy, he had a dream to become a dentist after working with an old American man, a dentist whom everyone called “humanitario.” Yet the island had few dentists and no dental school at that time. His only chance to attend dental school in the mainland U.S. was to apply for a scholarship, but only five were awarded on the island annually, a tremendous long shot.

What followed was an even wilder long shot.

Ramón León had a vision: a series of numbers came to him. He and his friend, Guillermo, were talking of playing the lottery (Guillermo did, my dad was saving as much as he could for college), and a number came to my dad, all of a sudden. It’s not that far-fetched. Abuela Chepa, who had earned the esteemed title of Doña Chepa, was a curandera, one who healed with herbs and the laying on of hands, a bruja or witch whom villagers sought for advice, cures for their ailments, even to tell their futures.

“Hey, Guillermo, I think I just thought of the number to play in the lottery!” Dad shouted to his friend.

I can imagine the look of Guillermo’s face when he believed Dad would finally play. Guillermo teased him that he was finally loosening his purse strings, or probably used some epithet common in Spanish of that era.

Then–amazingly–the lottery salesman strolled into town with a ticket that had the number Dad saw in his head.  So, for the first time in his life, my father was so sure that a good fate would befall him that he bought not only a single ticket, which sold for twenty cents, but the entire sheet of thirty tickets for $6.00. It was all the money he had saved since he was a boy of seven, selling pastries for a penny a piece to the macheteros, the men who wielded their machetes in the sugar cane fields. It was an enormous amount of money at the time in 1944, when most people made less than a dollar a day working in the cane or coffee fields.

My sisters and I grew up hearing this story, so to me, it’s part of my history, and it’s inspirational what he accomplished with his fortune.

He went to Michigan, barely knowing English, and completed college and dental school. After a long career, when he finally retired, many of his patients cried.

To read more of the real life characters in the novel, visit my blog, www.celestejleon.blogspot.com. I will also post about the history of Puerto Rico and its rich culture. Through writing prompts and suggestions, you can tell your own story, or interview a friend, mentor, parent or grandparent.

It took me nearly ten years and hundreds of rewrites to complete my novel, inspired by the story of my father’s life. Luck is Just the Beginning, has been brought to fruition. A beautiful tale. A dream come true for me, too.